Flagstaff’s downtown is split by the proverbial railroad tracks—but in this case, I don’t think there’s a wrong side. The north side is a historic district; on the other side, old warehouses fill the limited space between the tracks and Northern Arizona University. Each has a distinct vibe of its own.

Older masonry structures make up the historic district and crowd the sidewalks. As a result, the streets are narrow, and parking is limited. If you find a parking spot, it’s easy to walk about the 24 blocks downtown. When the founders laid out the town, they included alleys so deliveries and utilities would be off the street. That may have worked in the mid-twentieth century, but retail space is at a premium, so landlords split the buildings, and now shops occupy the building’s front and back. That means there’s always a beer delivery truck clogging the street somewhere.

I get the feeling that since the city is Arizona’s “premier” ski area, the city planners are using other resort towns as models. There is the usual mix of restaurants, bars, souvenir shops, and galleries for you to spend money in. The building owners maintain the facades well and have decorated them with low-voltage lights—for that Disney Main Street look. However, something’s missing. The Snow Bowl doesn’t draw the same skiers as Aspen, Telluride, or Park City (the airport couldn’t hold that many private jets). So, although I enjoy walking about and seeing the architecture of the old town, it needs more polish.

If the area north of the tracks is all façade, the south side is another story. It’s more bohemian, rustic, and organic—as you’d expect from a college town. The merchants may slap paint on their industrial buildings and hang an open sign on this side of town. They depend on the product and repeat clientele to survive. You’ll get the same bar food, but without the pretentiousness. For example, this is where the youth hostel is. Over the past two weeks, I’ve shown motel signs from here, and this is where you’ll find a café called the Tourist Home. This eating establishment has good food, but they’ve replaced the wait staff and cashier with your cell phone—petulant geezers like me, beware (they dare to expect tips).

For this week’s picture, we’re going to cross the tracks north to the Aspen and San Francisco Streets intersection. Here we’ll see Flagstaff’s third oversized sign on scaffolding. But this one is on the roof of the Hotel Monte Vista, one of the oldest hotels in Northern Arizona.

Monte Vista has an interesting backstory. It was built in the 1920s with money raised by local citizens. Including a big chunk from Zane Grey, they raised $200,000 to fund an upscale hotel the town desperately needed. It opened on New Year’s Day 1927 as the Community Hotel. It was a publicly held business until private investors bought it in 1960. Besides the hotel, the building was home to the Post Office, newspaper, and radio station, and its lounge was a speak-easy during prohibition. The hotel’s Website has a page with other histories, famous guests, and ghost stories. You can read it here.

I shot this week’s image called Hotel Monte Vista early in the morning before the sun was up and the streets were empty. The lack of light muted the building’s colors. It looks like I was trying for a sepia-toned effect, but I wasn’t. It’s an unusual look for me, and I’m not sure it works. What do you think? I also noticed that the signs on all three of this month’s photos have the sign on the right. I would have changed that had I thought about a grouping layout. 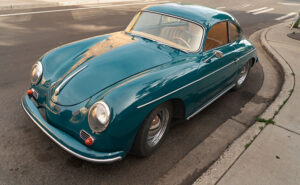 Teal 356 – I stumbled on this Porsche while on my morning shoot on the south side of the tracks. It proves that even the bourgeoisie appreciate classy cars. You can view my Web version of Hotel Monte Vista on its page by clicking here. I hope you enjoy seeing this month’s trio of hotel signs. Next week, we start a new adventure from Northern Arizona, so be sure to join us.

Till next time
jw

BTW: A couple of weeks ago, I wrote about coffee cups, contests, and calendars. I asked for your advice and the response I got was: <crickets> – – Silence – – </crickets>. You’re not interested, so to paraphrase Seinfeld’s soup-Nazi character, “NO CUPS FOR YOU—ONE YEAR.” Now I have to shave my head before meeting up with Larry and Mo.

6 thoughts on “Hotel Monte Vista Picture of the Week”

Stay up to date.